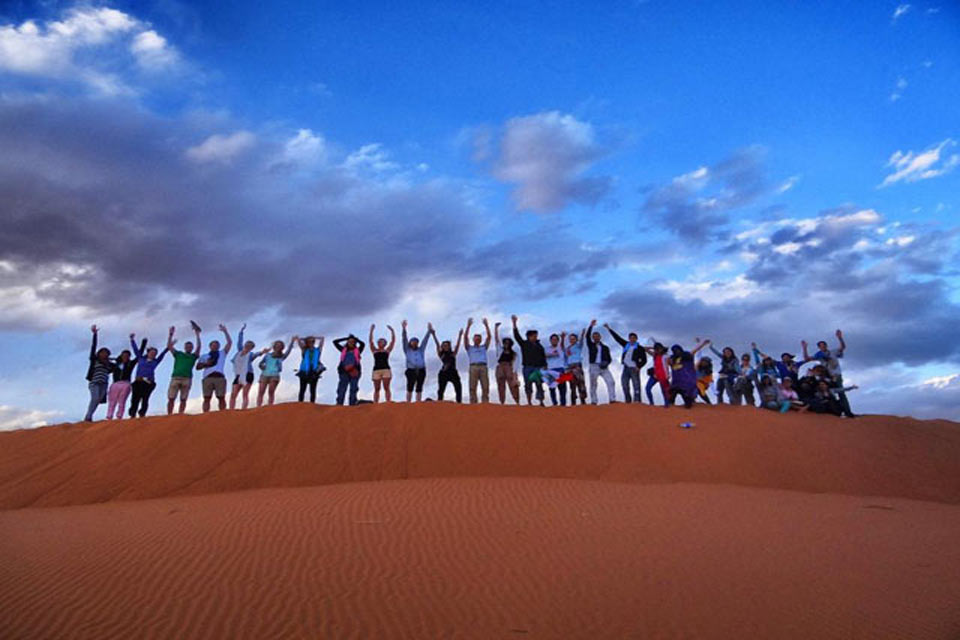 Fes Desert Trips driver will pick you up at your hotel or riad at 7 am for the fabulous journey up into the High Atlas Mountains. Your journey begins with a breathtaking drive up in between the peaks and then through the astounding Tizi n'tichka Pass, over two and a quarter kilometres above sea-level, along twisting, turning mountain roads, dotted with picturesque Berber mountain villages and crystal clear waterfalls, until you arrive at the area around Ouarzazate where you can take a pleasant stroll to examine the traditional Moroccan architecture that comprises the Ait Ben Haddou Kasbah,the largest in Morocco and a UNESCO World Heritage Site with very impressive walls. It's a timeless, ancient place used as the backdrop to more than twenty Hollywood films including Lawrence of Arabia, Indiana Jones and Gladiator. This central area of the country is vibrant and exciting and surely one of the most romantic regions in Morocco, huddled between fertile green river valleys with their extensive palmeries and burnished mud-brick houses burning under the blazing Moroccan sun in dazzling colours beneath an azure sky.

After the Kasbah, explore the film sets and studios of Ouarzazate, Africa's Hollywood whose astonishing topography and scenery have lured some of the world's leading film-makers and directors to make use of the landscape. These are the largest and most famous film studios in all of the African continent. You may visit the studio museum where you get to see props and other items of interest from films such as Babel, The Mummy and Hideous Kinky as well as parts of the popular TV series Game of Thrones. Spend the night in comfort at an hotel in Ouarzazate.

Day 2 : Oasis of Skoura - Mighty Mountains - A Night in the Desert

After a hearty breakfast, you will first travel to another UNESCO World Heritage kasbah, this time that of Taourirt, a remarkably preserved and quite lovely place exhibiting the very best of traditional Moroccan architecture and beloved of both tourists and locals alike. Following this, you will head to the fertile oasis of Skoura, surrounded by huge groves of palm trees and afforded with stunning views of the mighty Atlas Mountains.

Then, it's on to the beautiful Berber town of Kelaat Mgouna where, if you arrive in May, will be celebrating the annual Festival of Roses. This provides the people of the region the chance to get together and trade many products that they make from roses including the famous rose water that you will get the chance to try and buy if you wish. The lovely aroma of this scent will stay with your clothes and skin for after you've left this charming place and used on ones bed linen it can be a joy to freshen up your night chamber.

Next, it's off into the mountains again, as you are driven through the delightful Dades Valley, cut deep through banded sandstones and limestones , over an off-road trail past cave-dwellings where a few of the world's last troglodytes still live. The voyage carries on through the 300 meters deep canyon of the Todgha Gorges cut through the easternmost tip of the High Atlas Mountains where you can enjoy some hiking around the pretty village of Tinghir. The Tinghir and Todgha Gorges are the highest and narrowest in Morocco and some would say the most beautiful. Dinner will be served and you will spend a peaceful night at a hotel in the heart of the Todgha Gorge.

Day 3 : Share in the Beauty of the Erg Chebbi Dunes and the Hypnotic Sahara

Following breakfast, Fes Desert Trips will take you to Erfoud with it's array of famous fossils, be sure to pick up a beautiful bargain, but don't forget to haggle! You also get to visit the wonderful workshops where men prepare the fossils, removing them from the rocks and cleaning them up with expert skill.

Then, continuing on east, we reach the Sahara's edge town of Rissani, the first capital of the Alaouite dynasty which is that of Mohammed VI, Morocco's current monarch. A little after that, you will be amazed at the startlingly sudden appearance, as if by magic, of the Erg Chebbi sand dunes. These dunes are massive; up to 50 meters in height and extend eastwards all the way into the Algerian Sahara. At the foot of the sand dunes your Kasbah/ hotel awaits you, along with a refreshing glass of hot sweet mint tea. and you can chill out after the long journey and enjoy a delicious dinner while listening to the sweet strains of traditional Berber music until it is time to sleep.

After breakfast, you can choose your own experience; the delights of a walk through the immense dunes of the Erg Chebbi; perhaps a refreshing dip in the hotel swimming pool; or maybe you'd prefer the option of a shopping trip to the nearby villages of Merzouga, only fifty kilometers from the Algerian border, which boasts the largest natural underground reservoir in Morocco, and then the tiny Khamlia, called the Village of the Black People, as it is inhabited by the descendants of slaves taken from The Sudan who will enthrall you with their performances of their much loved, sacred Gnawa music.

At dusk, you will find your camel prepared to carry you off into the glorious sunset for an unforgettable ninety minute camel trek through the shifting desert sands before you arrive at a traditional Berber desert encampment, where you will spend the night in a cosy tent, surrounded by mountainous dunes. Your guide will cook you an authentic Moroccan repast while you just take it east, watching the stars, so many and so bright you feel you could just reach out and touch them, and listening to the soft sounds of time-honoured Berber music. A truly memorable day.

An early start, as you are awoken to experience the sun rising over the sand dunes, then you will ride your camel gently back to a hotel for your breakfast, during which ride, you cannot fail to notice the shifting and changing of the shadows cast by the dunes, lengthening and shrinking as the day progresses.

After breakfast, the journey to Fes begins with a drive to the important, Sahara's edge town of Rissani and then you'll be passing through the Middle Atlas Mountains that are said to hold up the sky, winding your way through forested peaks, twisting mountain streams and gushing springs, and spectacular, jagged walls of rock until we reach the huge cedar forests around the quaint, peaceful Berber town of Azrou, The Rock in the local Berber dialect, where the famous Barbary Apes, actually macaque moneys, will try to get a share of your food in the heart of their natural habitat.

Your last stop before journey's end will be at delightful Ifrane, built by the French in the 1930's and known as Morocco's Switzerland because of its Alpine-chalet style of architecture and aspect. In the winter, it is snow-covered and there is a ski resort at nearby Michliffen. And then on to Fes where the tour ends when your Fes Desert Trips driver drops you off safely at you hotel or riad.