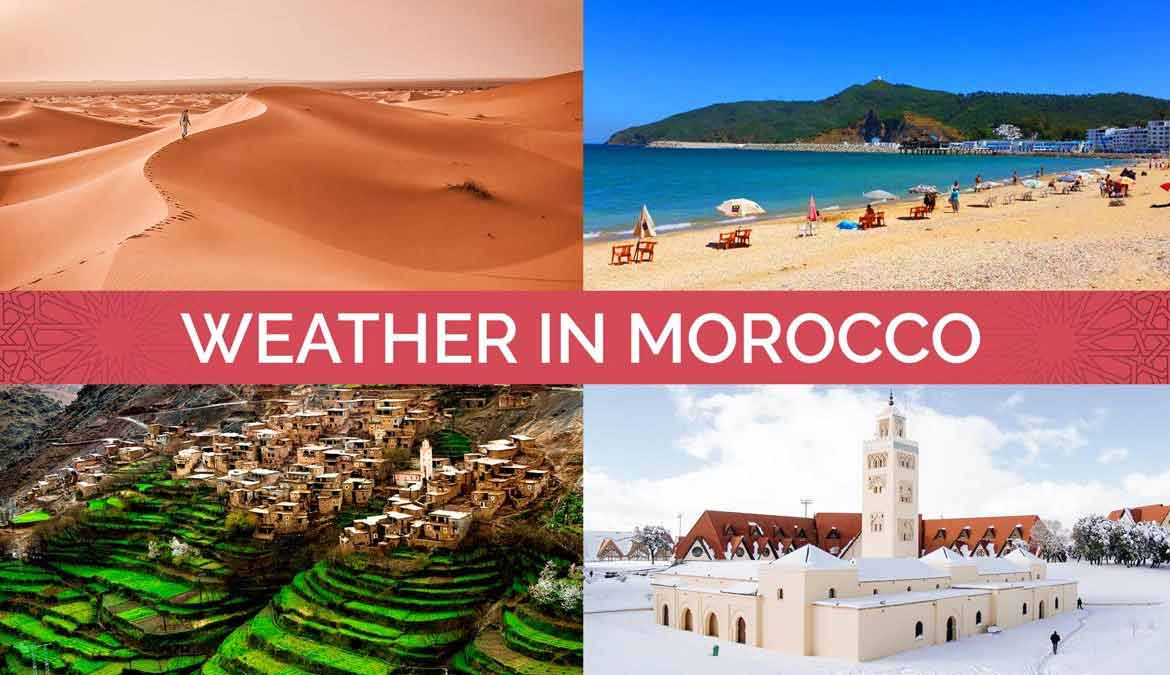 A Guide to the Climate of Morocco.

Many people wonder what the best time to visit Morocco would be. Often they think that Morocco is boiling hot all year round but, contrary to popular belief, the climate in Morocco is seasonal and distinct from region to region as the varied geography means different temperatures, rainfall and wind.

As can be seen, Morocco has a hot summer and much cooler winter with much more rainfall in the north than in the south. So, whether you're planning full Morocco tours, desert tours or just a day tour to a particular location, it's important to know a little bit more about the weather in Morocco.

Morocco has the Sahara Desert in the South, four major mountain ranges, central plains and an Atlantic and a Mediterranean coastline. It thus has four seasons, though the weather is normally good; sunny and dry.

Let's have a closer look at the climate in Morocco by season.

Also the end of May and the beginning of September.

The summer in Morocco can be very, very hot indeed and with a distinct lack of a cooling breeze, except for on the coast or high in the mountains, many travellers may struggle as the temperature often doesn't drop much even by night and many hotels, guest houses, coaches and taxis don't have air conditioning. If you're taking one of the desert tours it's worth remembering that the heat could become intolerable during the day, though it will get cooler in the evenings and maybe quite refreshing at night. It's best to do what you can in the early morning and evening and relax indoors, in the shade or in a pool during the day, please remember your sun screen, a hat, sunglasses and loose cool clothing but don't forget to bring warmer clothing for the night.

Many Moroccans abandon their cities to holiday in the cooler coastal areas for the summer and it's not a bad idea to arrange your Morocco tours itineraries to suit as well.

It doesn't often rain in these months, though there are sometimes thunder storms and flash floods in the mountains, this is rare and when the occasional few drops of rain may spatter on your face in the evening it is really rather a relief.

Or often the second half of September through to the first half of November.

This is one of the best times that people prefer to take their Morocco tours as the country still has many hours of sunshine, but it's not too hot and there isn't much rainfall. The nights are lovely and cool but not cold.

Usually the second half of November to February.

Although it is colder and this is the season when Morocco gets most of its rainfall, it's still a lot warmer than many European countries or some areas of the USA, so you still often see tourists in shorts and t-shirts. Most days are still dry, November  sees much of the rain in the north, though the south is still often largely dry. I recent years, even the winter has seen very little rainfall, perhaps a sign of the dread Global Warming. Still, it is sensible to bring warm clothes and a light raincoat.

There will even be snow in the mountains during this season and there are places to go skiing for those looking for a different winter experience, Michliffen in the Middle Atlas mountains is an example of a Moroccan winter sports resort.

The Middle Atlas Mountains in Winter.

Top Tip : The Christmas and New Year holiday period is becoming increasingly popular for tourism in Morocco. The consequence of this is that hotels and guest houses become much more expensive and it is wise to pre-book as many places become full.

SPRING : March, April and May.

Spring is probably the best time of year for Morocco tours, as the climate in Morocco is pretty much perfect at this time. Long, warm sunny days with some chance of rain, but it won't be much or last long, and peasant evenings and nights, it's the ideal time to visit. The flowers are blooming in a myriad of colours, the birds are singing, lambs frolicking and everything looks fresh and green before the hot summer sun bakes everything brown.

Even the Sahara has new green growth in the Springtime.

Top Tip :As with Christmas and New Year, it is worth booking your rooms in advance at Easter time and be aware that room prices may be significantly higher at some establishments.

Top Tip :April is known for its duststorms and sandstorms in the Sahara and it can be pretty windy in much of the south of the country. So if you are planning desert tours, it may be wise to choose another month or take all due precautions!

It is also worth remembering that local cultural events may have an influence on your stay, for example the holy month of Ramadan is not fixed but moves each year due to the Islamic lunar calendar. In Ramadan you will find that most of the cafes, restaurants, bars and alcohol retailers will be closed and it may be more difficult to obtain a thirst quenching drink during the heat of the day.

Always keep an eye out for local seasonal festivals.