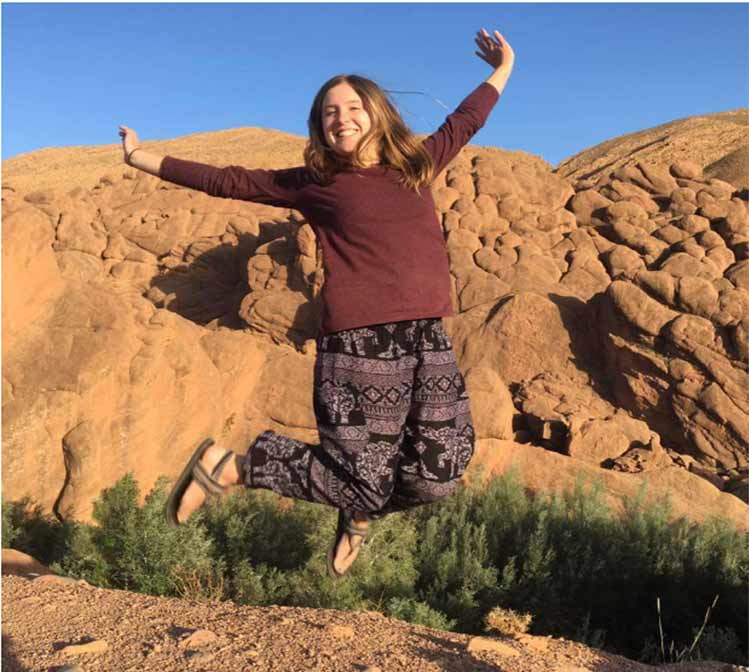 N.B. This guide was compiled by a European female who has lived and travelled in Morocco for fifteen years. Fes Desert Trips hopes they will be of assistance to you. Please feel free to ask if you have any additional questions.

The keyword is "respect". Morocco is a Muslim country and has its own traditions and values which it is polite to respect. And it is not a good idea to draw attention to yourself especially if travelling alone. So, don't wear figure-hugging outfits and avoid exposing too much cleavage or your legs below the knee. Morocco is usually pretty hot, so many layers of loose, comfortable clothes is a good idea.

Also bear in mind that some areas are more conservative than others, what might be acceptable on the beach or in a more progressive city such as Casablanca may not be acceptable in more traditional old medinas like Fes or in rural areas.

It is probably better to bring a one-piece bathing costume, but a sensible bikini should be okay, just perhaps not a thong or itsy-bitsy items.

Plan on long walks both in the countryside and in cities, particularly pedestrianized ancient medinas, so bring comfortable walking shoes or boots.

It is best to bring your feminine hygiene products with you.

For more information check out Fes Desert Trips' "What to Wear" guide.

Most Moroccan males are perfectly charming, well-mannered and respectful, but there are quite a few exceptions and you will probably receive some unwanted attention at some point, especially if you are a female travelling alone or with other women.  And don't think age will make you secure, a Western female will be seen as fair game if you are 16 or 60. As a woman now in her sixties, I still get my fair share of marriage proposals. You will quite likely be asked to marry someone you've only just met or asked if you would consider marrying a Moroccan man as you will be seen by some as exotic, by some as without morals and by others as a passport out of the country. I was once asked to marry a gentleman and when I politely declined, showed him my wedding ring and pointed out that I was already married, he was not in the least bit perturbed and gave me a piece of paper with his phone number, while instructing me to call him when my husband died or we were divorced. My husband was with me at the time.

Try not to make eye contact with men, they will either see it as flirtation or as a challenge to thier masculinity. Wearing sunglasses is an option, or you could face them off, which normally works if you can stare and not flinch for a while.

If you are travelling with your male partner, don't be too obvious in your displays of public affection, this can cause much dissaproval.

Do NOT kiss the men on the cheeks like they do with each other sometimes. But do kiss ladyfolk on both cheeks if you feel like doing so.

When invited to someone's home, always take off your shoes before entering. This is the custom.

Eat with your right hand only, unless you are using utensils, as the left hand is treated as "unclean".

The consumption of alcohol is permitted in Morocco, but keep it to your hotel and the bars and restaurants that serve it, drinking in public is a very bad idea.

Women smoking is frowned upon, but will be tolerated.

DO NOT eat, drink or smoke in public during the holy month of Ramadan, though this is still fine in tourist designated areas.

Listen to the advice of those in the know - like me (!) and your Fes Desert Trips guide.

Safety Advice for the Female Traveller :

Is it Safe for Lone Ladies in Morocco?

Basically, yes, it's a safe country, men may look and say things, but it's not usual to be touched and assaults are, thankfully, very rare indeed.

However, it pays to be prudent, as no country is entirely free from crime and those who'll take advantage of a situation they see arise, so :

If you find yourself alone, don't dither, have your destination in mind and keep moving, try to look like you know where you're going, even if you don't. Don't ask men on the street for advice, it is better to go into a shop or restaurant. It's okay to chat with men in their working environment but not in the middle of the street.

Don't go somewhere with someone you don't know very well.

Keep your money in a secure place, don't wear too much ostentatious jewellery and be careful with camera phones.

Take care and stay safe, there's no need to be fearful, just cautious - travelling in Morocco can be a wonderful experience and is mostly very safe and enjoyable, the Moroccan people are rightly famous for their hospitality. Have fun!