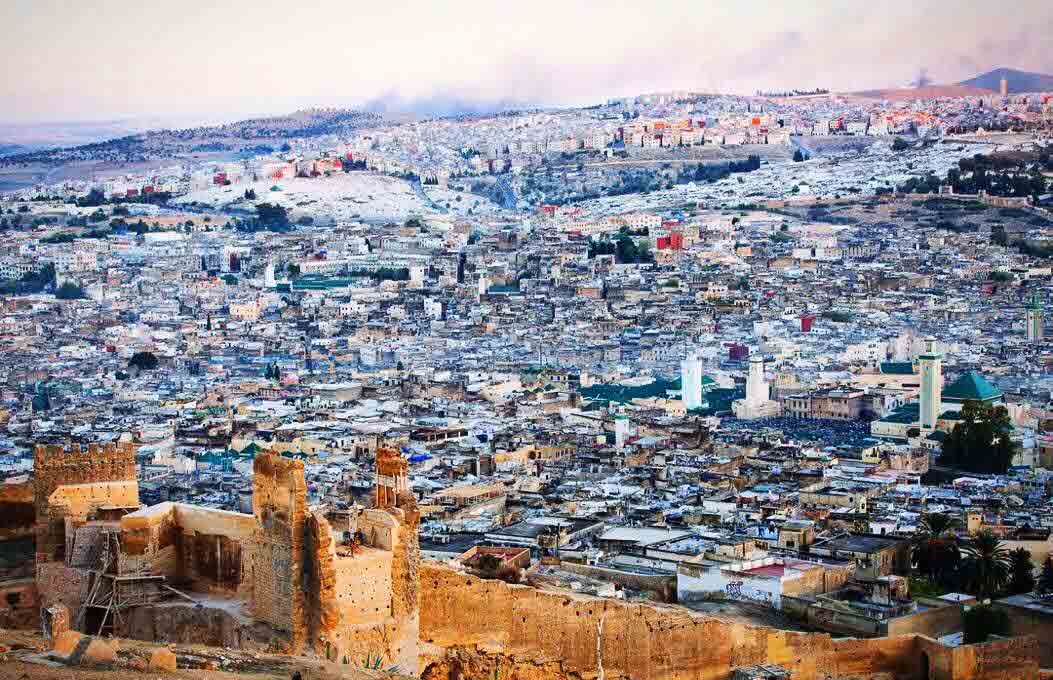 TOP TEN THINGS TO DO IN FES.

We love our city and hope you will, too, so be sure to read our guide of ten of the not to be missed places to visit in Morocco's cultural and spiritual capital. There's so much to see and do besides, but here's Fes Desert Trips' countdown of the top ten , in our opinion, anyway!

The old medina of Fes, or Fes-el-Bali is certainly worth a day or two's exploration. Many of our other top 10 things to do lie between its historical, gated walls, so, though exploring alone can be fun and exciting, it may be best to hire a guide for the day so that you can pack as much as possible into your time. Fes Desert Trips can provide a reliable, knowledgeable, English-speaking guide, of course, after all the medina has 9,600 twisting, interlinked streets, alleyways and dead ends and there are no cars, taxis or even motorbikes allowed.

Fes medina is a working medieval city, you can still see people working with tailors, carpenters and metalworkers plying their trade as they did hundreds of years ago, the souks (markets) are full of fresh, organic produce, there are mountains of spice and lots of cafes, many with stunning views from their terraces.

The sounds, sights and smells of the medina, it's donkeys and horses, mangy cats, calls to prayer from the minarets of the mosques and general hustle and bustle are quite an experience, certainly one not to be missed.

A fairly modern structure, built in 1913 by the French in Moorish style, the gate is now iconic and marks the end of traffic and the start of the main streets leading downhill through the medina. It has a blue and white tiled exterior; the colours of Fes, and a green and white interior; the colours of Islam and is an excellent photo opportunity before embarking on your trip through the medina. At this end of the medina are a lot of tourist friendly souvenir shops and even bookshops that have volumes in Arabic, French and even English!

Another absolute 'Not To Be Missed' attraction are the three Tanneries of Fes, where the leather making techniques have remained unchanged for centuries. The Choura Tannery is the biggest and largest and dates from the 11th century. Here you can observe the large stone vats of dye or liquids for softening the hides and see the skins hanging out to dry in the sun. The bright colours include henna for orange, indigo for blue and poppy for red and the animal skins used include cows, goats, sheep and even camels.

The best views can be had from atop the surrounding leathergoods shops, but they will try to get you to buy something in return for your entering their premises, the prices are good compared to Europe, but it is wise to haggle and it is possible just to leave without purchasing anything. The bags, jackets, coats, shoes, slippers and belts are of excellent quality.

On the negative side, the smell can be unbearable for some, as the softening liquids include pigeon droppings, cow urine and quicklime, so the fresh sprig of mint you may be offered to hold under your nose is most welcome.

Top Tip : Visit early in the day if you can, as the smell is far more bearable.

The University of al-Qarawiyyin is the oldest continually operating university in the world. Established in 859 by a Muslim woman, Fatima al_Fahiri, whose sister founded the nearby Andalusian Mosque, it soon became one of the foremost spiritual and educational centres of the world. The associated mosque is one of the most holy sites in Islam and is a wondrous mix of ancient Moroccan and Islamic architecture, much of it recently restored, while the library contains ancient manuscripts and documents of great historical and religious significance. The university still accepts students today from all across the globe.

The only reason this isn't at the top of the list is that non-Muslims are not permitted to enter the complex, but some of the exterior decoration is beautiful and glimpses through the broad, open doors and a quick photo or two are allowed.

Top Tip: Don't forget to buy candles and incense from the stalls near the main entrance. Nice for souvenirs or personal use and supporting the local community.

Though not as old as the Qarawiyyan, having been founded in the mid 14th century, the Madrassa Bou Inania showcases a different period of Moroccan history bring from the time of the Marinid dynasty and was the crowning achievement of that era. It was also both of religious and educational significance and is almost unique in the country in being a Muslim site that encourages non-Muslims to enter. So, enter at your leisure and see the minaret, the only one in the area adjoining a madrassa, and you'll also be astounded by the intricacy and splendour of the mosaics.

Built in 1357 on the orders of the Marinid Sultan Abu Inan Faris, the weight operated water clock is directly opposite the Madrassa Bou Inania and connected to the school. The clock has 12 windows with doors and platforms which used to house brass bowls. A small trolley ran behind the closed doors which was anchored to a float controlled by a water reservoir that emptied at a regular flow. each hour a door opened and metal ball dropped into the bowl by the door. The wooden beams you can see sticking out supported a little roof to protect the bowls and doors from the elements.  The clock is currently being repaired, but is still well worth a look as the carpentry is intricate and beautiful.

There are three museums of interest you could visit, not only as they can be interesting and beautiful, but they provide a haven of tranquility away from the comparative bedlam of the medina streets.

The Dar Batha Museum is located just outside the medina, so may be worth a visit before you go in, it has lovely displays of the distinctive blue and white traditional pottery of Fes as well as other interesting items of local artisanship.

In the heart of the medina, the Nejarine Museum of Wooden Arts and Crafts is beautiful from the outside and has a fantastic terrace cafe with terrific views of the old city, but is perhaps not the most exciting or well-presented of the three.

The Belghazi Museum  is home to lots of artwork, ancient and modern, but here you do have the opportunity of purchasing some of the objets d'art or paintings.

The old ruins of the Marinid Tombs are not in themselves overly inspiring or worth a special visit, but the view provided from their position overlooking the entire medina of Fes certainly is. Breathtaking!

Look down onto the mixed earthenware and green tiled roofs of the city, count the minarets, see the swifts darting hither and thither. It really is quite extraordinary.

Pretty much a separate medina by itself, the Jewish section, or Mellah, lies between the ancient medina of Fes-el-Bali and the Royal Palace and has its own atmosphere and style. The name comes from the word for 'salt marsh' which the original walled city was built. The location was partly to provide a protective barricade for the Royal palace from the oft rebellious inhabitants of Fes-el-Bali and also so the royal forces could help protect the Jews from the same potential danger as the Jewish businesses were so important to the economy.

Unlike in the Fes-el-Bali, the houses here are balconied and have windows facing out into the street, there is also a Jewish cemetery and a UNESCO World Heritage protected synagogue that are well worth a visit.

In a suburb of Fes called Ain Nokbi, to protect the main medina from the dust and the heat of the furnaces, are the potteries, where the famous blue and white pottery of Fes is produced as well as many other colours of product and earthenware, ceramic tiles and ornaments.

Free guides will escort you through every phase of the production process, though you won't be surprised to learn that your tour will end in a shop where you can buy some of the objects you've just seen being made.

Very entertaining and definitely of interest if you have a bit of extra time.

We hope you enjoy your visit to Fes and if there is anything else of interest to you, don't hesitate to ask your Fes Desert Trips representative who will be only too willing to help you.