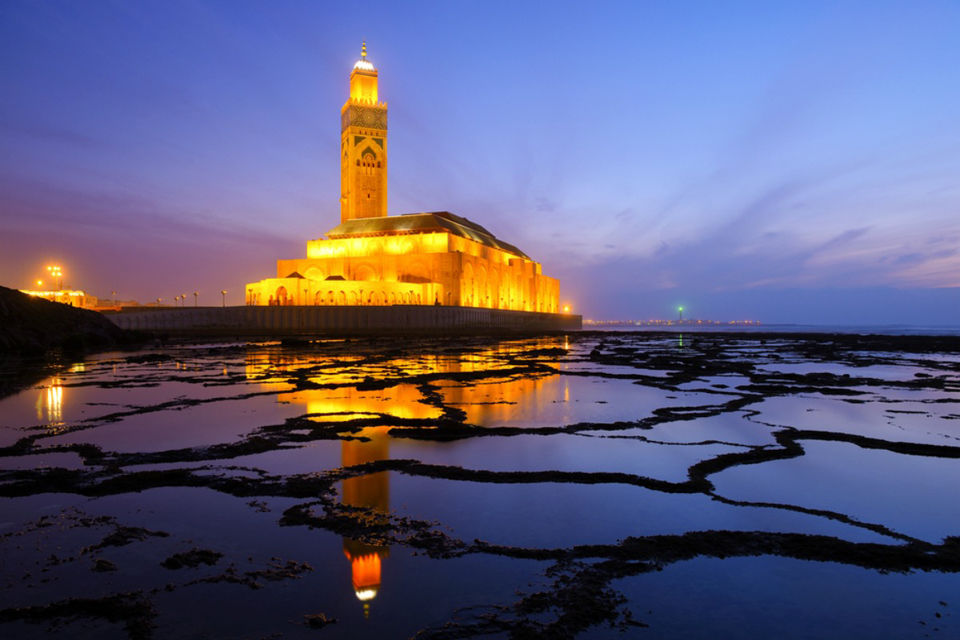 Casablanca! Just the name conjures up romantic images, but Casa, as the locals call it is so much more than just a dream or an old movie and it is where most Morocco Longer Tours start. Check our captivating Morocco Tours from Casablanca.

Fes Desert Trips can show you all the sites from the fabulous Hassan II Mosque to the ultra modern shopping centre of the Morocco Mall.

Casablancais a huge, bustling, vibrant city, the biggest in Morocco and the business and economic centre of Morocco, even though Rabatis the capital it is Casablanca that boasts one of the largest artificial ports in the world.

You will be able to see the impressive Hassan II Mosque, designed by Michel Pinseau, the famous French architect, begun in 1980 but not finished until 1993 at a cost of around 800 million dollars. It is situated on a promontory reaching out into the Atlantic and has room inside for 25,000 worshippers with room for a further 80,000 in the adjacent courtyard. It is thus the second largest mosque in the world and the minaret, at 210 m in height, is the world's tallest. It is one of only a few mosques in the country open to non-Muslims and offers guided tours of about an hours duration.

Nearby, is La Corniche, a beach front area that boasts many fine restaurants, swimming pools and the beach itself. A full range of beach sports and activities are available here. It as at the end of this district that you can find the Morocco Mall, for those of you who love to shop, this is the place, one of the largest shopping centres in the whole of Africa, it contains many of the well known chain stores and boutiques, has beautiful fountains, an indoor aquarium complete with sharks, as well as an ice-skating rink and fairground. It even has it's own traditional souk as well as a variety of cafes and restaurants.

Also on the coast is the tomb of Sidi Abderhammane Thaalibi, a Baghdad Sufi mystic who founded Algiers and considered a saint, so Moroccans cross over to the little rocky island Marabout at low tide to pay homage and ask for favours, seek enlightenment, reflect on their lives or seek healing from their ills. None Muslims may not enter the tomb.

There are many pretty well kept parks to explore, the largest being the Parc de la Ligue Arabe, overlooked by the Cathedral of Casablanca, no longer in use, but open to visitors and a splendid example of Neo-Moorish architecture.

The old medina is much smaller than the ones in Fesor Marrakech, but its western walls and bastions, as well as the colonial-period clock tower have been lovingly restored and are well worth a visit. It is still possible to get lost in the narrow maze of narrow alleyways, but your Fes Desert Trips guide will ensure you can find your way out again! The pretty Berber Mosque is also located in the ancient medina.

Casablancaalso offers some of the best museums in the country, The Museum of Moroccan Judaism, which is the only Jewish museum in the Arab world; which demonstrates the influence of Jewish culture on Morocco and how peaceful co-existence was achieved in this tolerant country; the Villa des Arts is a museum of modern art with 800 permanent exhibits as well as temporary exhibitions of local and international artists.